OTTAWA, December 10, 2013 — The War Amps today commended the Government of Canada for adopting the Association's recommendations to cut red tape throughout Veterans Affairs Canada in order to make the Department more administratively efficient and to eliminate undue bureaucracy for seriously disabled veterans. 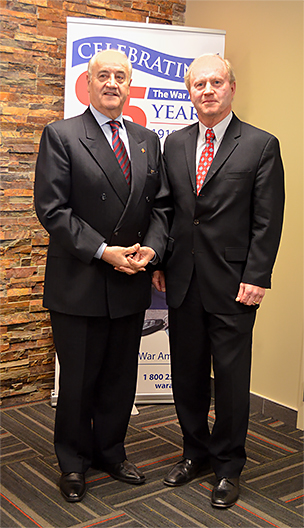 "For many years, The War Amputations of Canada, in conjunction with The National Council of Veteran Associations (NCVA), has raised serious concerns as to the unacceptable levels of red tape and bureaucracy that continue to exist in Veterans Affairs Canada's program delivery administration," said Brian Forbes, Chairman of both The War Amps Executive Committee and NCVA.

"As a matter of background, it became readily apparent that, in the context of the 2012 Federal Budget, the then Minister of Veterans Affairs Steven Blaney, became fully committed to his initiative to cut red tape throughout the Department, in an attempt to make VAC more administratively efficient," he added. "The War Amps has been fully engaged with the Minister in a continuing mission to take him up on his offer to identify other areas where red tape and undue bureaucracy can be substantially reduced."

In early 2012, The War Amps formed a Task Force to provide additional input for the Minister's consideration of further areas where bureaucratic obstacles could be eliminated in VAC so as to improve and make more effective, the service and benefit delivery to veterans and their dependants. The Task Force included both traditional and modern-day Veterans, the Association's National Amputee Centre and Service Bureau staff and other consultants in formulating a list of substantive proposals relating largely to the Seriously Disabled Veteran community in Canada. Its recommendations were summarized in a report which was delivered to the Minister in October 2012.

Mr. Forbes noted a common theme to many of the Task Force's recommendations rests in the fact that in order to make VAC's administration and services more effective, it must be recognized that removal of unnecessary red tape and layers of bureaucracy are absolutely essential to addressing the readily apparent needs of Seriously Disabled Veterans.

"Unfortunately, there is a sense of the veterans' community that the Department does not trust the client, and that for some reason the veteran is out to take advantage of VAC. By and large, this is simply not the case, particularly with respect to Seriously Disabled Veterans whose needs are self-evident and whose entitlement to benefits should be the highest priority for the Department," he said.

The second common theme lies in the fundamental conclusion that, by (a) minimizing the need for doctor's prescriptions, (b) establishing annual approval limits for service providers, (c) approving specific prosthetic limbs automatically for amputees, and (d) providing cash allowances up front, these policy changes will allow veterans with the assistance of their case manager to manage their own disabilities. This will result in an element of savings by not only reducing VAC and Blue Cross administration but also would address the significant waste of precious family physician time in obtaining routine prescriptions.

"Following a series of meetings with the Minister of Veterans Affairs and Departmental officials, we welcome Minister Fantino's announcement today indicating that the greater majority of the recommendations emanating from The War Amps Task Force have been accepted by Veterans Affairs Canada," Mr. Forbes said. "We are currently working with Departmental staff to implement the required changes to the VAC guidelines and grids so as to improve the administration of the Department's prosthetic policy and related health care programs."

The War Amps, together with the 60 member organizations of the National Council of Veteran Associations, has consistently demanded over the last number of years that Veterans Affairs Canada implement an overall plan of action to fulfill its commitment to not only seriously disabled Veterans and health care benefits, but also the reform of the New Veterans Charter.